Trade Wars with China & What it Means to Investors

As we await a decision on the trade talks between the U.S. and China, it's important to understand what this trade war means for both sides and just how it will impact investors like you and me.

Where the Trade Wars with China Stand

Chinese President Xi Jinping will meet with President Trump when both leaders head to Osaka, Japan for the G-20 summit in late June 2019.

The hope is that threatening tariffs Trump has delivered to China will result in a completed trade agreement during these trade talks. And while the imposed tariffs on Chinese imports may deliver a punch to Americans on product price increases and supply-chain disruption, delay on decisions and uncertainty look different for both countries.

China has recently vowed to fight to the end on these tariffs. If this is true, a trade agreement isn't on the horizon.

And while Americans haven't been feeling the after-effects as much, analysts suggest that is about to change with the recent re-escalation of these trade wars.

The impact would be applied to thousands of everyday consumer products. It would include everything from meat, seafood, fruit, vegetables, and other food items... to smartphones and dozens of other electronics and appliances ... to everything made of plastic, rubber, and wood.

How that relates to the benefits Americans saw from the Tax Cuts & Jobs Act is virtually erasing it all.

According to estimates from the firm, Oxford Economics, the per-household cost due to tariff increases could range between $500 and $1,000 depending on how long the trade war draws out. The mid-point of that projection is nearly equal to the TCJA tax cut for middle-income families and about 20 times the average for low-income families.

Do We Need China?

When we consider how much of the top industry sectors revenue from the U.S. and China is derived from their trade with the respective country, it doesn't bode well for U.S. companies that have a lot to lose. 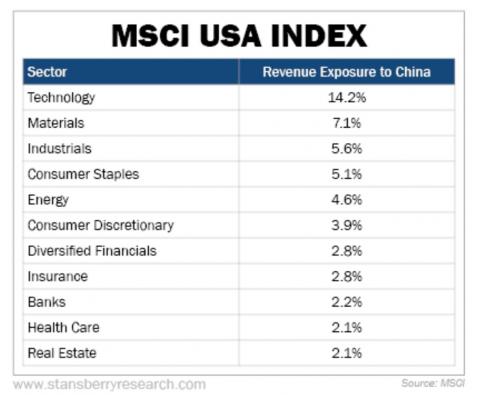 Trump's tariffs include an increase in everything from meat and eggs to hats and buttons, but it is the technology and energy sectors that are responsible for the bulk of U.S. sales.

The U.S. clearly receives far more revenue from China than China from the U.S.

Technology, materials, industrials and consumer staples get 5 percent or more of their revenue from China. And every major U.S. sector has 2 percent exposure or more.

Well, the tensions of the trade war aren't weighing too heavy on China. China is still one of the world's best-performing stock markets this year, up more than 15 percent from their early January 2019 bottom.

In the U.S., sectors that are susceptible to trade tensions, like manufacturing, construction, mining, and logging are seeing a slowdown.

According to the Labor Department earlier this month, the U.S. economy added 75,000 jobs last month, a significant drop from 224,000 jobs added in April. The unemployment rate remained at a five-decade low of 3.6 percent, but wage growth disappointed, another sign of fading momentum.

Yet, in the wake of these events, the U.S. stock market is performing well as investors possibly believe low-performing reports will encourage the Federal Reserve to act in a way that helps drive the economy.

Time will tell how the trade war plays out and whether both sides will work to find a meaningful resolution for the good of our countries.

Bradford will continue to monitor the economic impacts of the trade war and report on what it means to investors. Subscribe to stay connected to top news and market reports.

The views expressed are those of the author as of the date noted, are subject to change based on market and other various conditions, are not a solicitation to purchase or sell any security and may not reflect the views of United Planners Financial Services. Keep in mind that current and historical facts may not be indicative of future results.